Last Friday, I flew to New Mexico with a friend to the SANTA FE Film Festival (SFFF).

The theme was : Dream awake. What a good motto, what a wonderful idea.

Santa Fe and the SFFF : Such a marvelously energetic city, such a great event. Films, shorts, Q&A with directors, actors, producers, composers. Meeting passionate people, sharing their work and their art and their thoughts about it  with a genuine simplicity. It sounds obvious, of course. And yet, the authenticity feels so unspoilt in a festival like that one,  that you leave the event boosted, and fulfilled, especially if you are  an oddjobber like those who flocked in there. 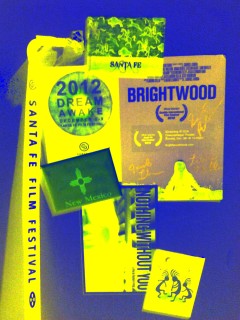 Being in Santa Fe again, in (almost) Winter time, with cold air filling the bright blue sky saturated with sun beams, it felt so good.

This city has really something about itself and in itself that you just can’t miss to experiment. The air seems to be rustling with extra positive vibrations.

The nearby mountains (visible from nearly every corner, unlike Houston, flat as my palm) anchor your looks into that beautiful Nature. You can’t escape beauty : architecture, settings, landscapes, buildings, the most creative human activity (painters, writers, potters, craftsmen, filmmakers, even  festivals to celebrate all that!!), a true osmosis between our natural environment and our humanity.

Georgia O’Keeffe sensed that earthy energy and savage beauty as she transcripted on the canvas or on the paper those vibes. Her paintings are as peaceful and quietness inducing as the vision of the surrounding scenery.

No wonder a film festival set in this city would attract talented and tactful professionals.

Our stay was blessed and punctuated with the most exquisite and nice encounters, some probable, others completely impromtu, absolutely unexpected. Saturday early morning, we came in the CCA to retrieve my friend’s ticket, and we ended up in the nearby venue, chatting with the person in charge that day, and visiting the Military Museum of the NM National Guard. very interesting.

Then we went downtown Old Santa Fe, for a visit before the screening of the film that lay at the core of this trip. We visited the Georgia O’Keeffe museum.  We chatted with I can’t remember how many persons. (It is me or it this city is triggering people into conversations?).

And then, the FILM. “NOTHING WITHOUT YOU”. Just as it was about to begin, we met the director, Xackery Irving whom we greeted and he was so kind as to take some time to talk to us, and thanked us for coming from so far, Houston.

The film deserves the prize it won at the Toronto Film Festival earlier this year.

Emily Fradenburgh is a lovely actress, impossibly talented and natural in her way of playing,  and her character is so appealing. We adhere to her motivation without the slightest reluctance. And we are thrilled, of course, because her life is at stake.

The script is well balanced, with drama and humour, thrilling moments and suspense.

And it has what most of us revere  : a twist end. But not a sloppy one, a well constructed, well defined and precisely chiseled one.

All in all the film is extremely good, finely crafted and structured. And the music is a pure moment of happiness.

The Q&A was a great moment, with The score composer, the producer, the director, the actress and another actor. The Qs showed that the audience is mainly composed of professional (talking about angles in shooting and stuff of the kind). And it was pleasant to learn as much by listening carefully to the As as we did for the Qs.

We went to the party held for the fest. And it was a blast, again, because you meet there all the people who make the fest! I talked with some of the crew of NWY, and they were forgiving to the enthusiast that I am. It felt like I was a child with a sugar tooth locked in a candy store! I also talked with the producer and the scriptwriter of the short we would watch the next day, “Brightwood”, winner of several prizes too. Amazing short, gorgeous sets, lovely child actress, the director of photography did an amazing job and it deserves its awards.

I feel so blessed and lucky to have been able to go to Santa Fe. And I wish all those talented people success, luck, and more creativity and extremely good connections to craft other good works and masterpieces for their audience to enjoy.

Thanks Emily, Victoria, Dorie, Xackery, Gabriel, Rick, Jacob, Keith, Ruth, Nani, Scott, and all of you who make all that possible.

I came back in Texas full of energy, a will to quickly achieve my writing projects – and particularly this road movie script. I am boosted, energized, more balanced, and I know that even ZERO budget films get shot. So, all is possible, you see.

It took a decade for the director Xackery Irving to achieve his script (it went through many re-writings and editings, as he told the audience), but at last, he made it. It must have been though, and depressing maybe sometimes, but it has a shape, a name and a prize to acknowledge its quality. Think hard and confidently enough that you can do it, and you’ll do it, and even better that you originally thought.