As for me, I confess, I am a fan. I am a great fan, though I never enrolled in any Holmesian club (maybe one day?).

In 2010 BBC produced a new theme on an old classic. The modern take on the  TV series,  conceived by Steven  Moffat and Mark Gatiss on a train while en route to a filming location in Cardiff, was bound to gain the affection of fans as well as neophytes. Sherlock, the much beloved sleuth that popped out of Sir Arthur Connan Doyle’s industrious mind got a dab of freshness and a makeover that left the audience astounded by the quality achieved. 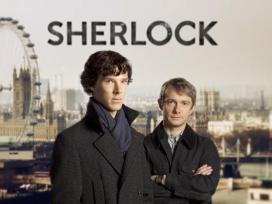 The narrative is not news, of course (I refer to Moffat’s 2007 previous piece of art, “Jekyll” which I recommend you watch), the construction is rigorous, the script is perfectly written (I read one, it’s just what we oddjobbers dream to write), and the style is as immortal as Conan Doyle’s. Narrative finds please the modern watcher who has already experienced high photography quality, graphic novelties and inlays of modernity in the screen (remember, for instance, how Matrix had opened the path to perfectly trimmed slow motioned scenes). And the actors’ performances please our sense of comparison as they are as equally good/perfect/wonderful/impossibly amazing (choose) as Jeremy Brett and David Burke & later Edward Hardwicke. Benedict Cumberbatch is a unique & definitive Modern Sherlock, just as Brett was the ultimate period Sherlock. And Martin Freeman is just above all the Dr Watsons we’ve seen . Rupert Graves is this admiring Lestrade Sir Arthur described  in the books and Andrew Scott is good news as Moriarty, pleasantly mad.

Netflix uploaded the Sherlock Season 2 recently, and last week I indulged in watching the 3 episodes in a single row. You think I am addicted? Well, ahem…

You see the show and you tell me if the whole thing isn’t anything but brilliant.

I’m hooked, I’ve turned the last scene in my mind hundred of times (in my sleep, thank whoever is to be thanked, because I have no time in daytime for such amusement, pages need to be inked and written, job must get done , contests participated in and publisher provided publishing with material!). I WANT TO SEE WHAT HAPPENS NEXT!!!!

The script writers have fulfilled their duties. The cliffhanger is teasing, audience skyrocketed, and we crave for more episodes.

This is currently one of the best shows to learn from, when you are a screenwriter, a director of the photography, a credits designer, and SFX creator (unless you care for BIG, BOLD, UNNECESSARY, or UNSUBTLE SFX). Not in order to duplicate, of course. To fuel creation and align to such excellency standards.

I had to divert my attention from Sherlock to reinvest my own projects and current works.

Sunday evening, I discovered Miranda Hart’s show ( I had a good laugh), and I liked it so much I ordered the DVD on the spot. (now, talk of a British TV series addiction). Very visual and known slapsticks, but who cares? Old tricks, you know… etc…etc…Have a look.

Pleasant day to you, dear readers. The 1st page of that short-film script awaits me…