Is it just me? Or are you, dear reader,  bothered too,  when a nice piece -TV series or movie- does not play DNA by the rules?

Namely, the color eyes chart. Especially, when it’s clearly said/showed/brought to our knowledge that NO foul actions or adultery/messing around have EVER occurred in the life of Madam since she’s married*? So?

So how come that THIS happens :

Unless… The father has transmitted one (Dominant) Brown to the bundle of joy to, UNBEKNOWNST to the screenwriter. Or props were not properly stocked and the person in charge lacked those colored eye lenses. Too bad…

Maybe it’s just me. I probably shouldn’t have been so much attentive as a student in 8th grade, I suppose. Or is it only because I was just better in genetics than in geology, and the knowledge has sunk in deeper and is still there? [I confess : I took my (sweet) revenge in excelling at genetics whereas I sucked at geology, AND I was being taunted by my biology teacher because my father IS a geologist. No kidding,”why my cousin has blue eyes and mine are only hazel ?” bore much more appeal than “feldspars KAlSi3O8 – NaAlSi3O8 – CaAl2Si2O8″. And honestly, the sole interest I have in stones is when they are square-shaped, small, sparkling, red or blue, mounted on a golden ring]

*(in “Downton Abbey”, Robert Crawley, Earl of Grantham, his wife  Cora, Countess both blue-eyed produce two brown-eyed daughters -Lady Mary and Lady Laura, or in the episode “The Hide”  of the series “Foyle’s War” the boy is also affected of the same heritage; and some others I do not recall right now).

**Recessive means it takes two of them lads to be strong, dominant means it is stronger, even on its own. It’s not me, it’s the law of Genetics. It’s possible to have blue inherited eyes if one of your parents is brown-eyed and the other blue-eyed, provided at the upper level (grand-parents) one of them had blue eyes too and had transmitted the Recessive gene to the younger generation. It means that the recessive (i.e. non-dominant) is stored in the genetic patrimony and express itself oddly and randomly with another recessive gene.

Just as the script (and therefore, the show) must not bear historical inaccuracies, nor errors (such as  continuity, plot holes, factual, visible crew, revealing, characters, police cars plates changing every other episodes…),  it must get the DNA heritage done properly, don’t you think?

Super Screenwriter explains it better than me : 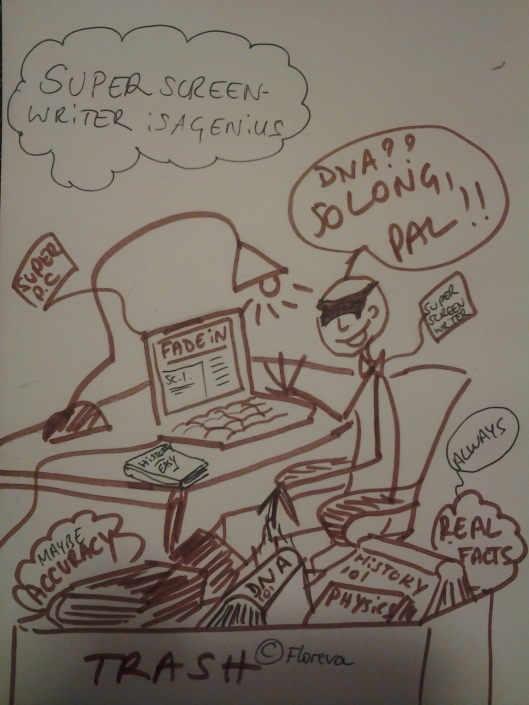 Super Screenwriter is a genius ©Floreva 2012