Hum, so Apocalypse… did I really wrote that? Well, this post has been brewing in my mind for quite some time now, the title is certainly a bit dramatic, provocative as well, perhaps.

We are clearly facing turbulent times, and it looks like is it not near the end. It is also a very interesting time, because what was hidden, denied, minimised, falsely turned as a misrepresentation of the truth is now coming up and is widely uncovered. People are not having it anymore, they unleash their inner power, and that power is their voice and their ability to unite in face of adversity/injustice/despondency. They break free from the status quo, from the unwritten rules that place abusers in high places and that their fellow powerful friends will cover for them and protect them, as they sympathise for them (a frat for criminals or misusers of power?). They break free and seek the truth and speak their truth. They have been denied that right for too long, but now, they unite to turn against their persecutors, en masse, the boomerang finally returns to its thrower. The very structure of those male-led, outdated, erroneously structured, abusive, destructive, fear-based, consumerism-oriented societies is bursting at the seams. Democracy in the dual party sytem as we’ve known it, although a good idea, and the best suited for humans, is unfortunately  reaching its limits and proving to be a much difficult system to sustain on the long-run than originally thought (Jefferson stated that democracy is only possible for small communities).

Watching on my screen Notre-Dame in flames, or parishioners being attacked in Sri Lanka, or in other places because of their creed, their sexual preference or their gender , after massive cover-up scandals had shaken the Catholic Institution, I thought it could very well be a metaphor for the dreaded Apocalypse of the Bible.

Apocalypse is the Greek word for Revelation. Revelation means that things that were hidden, or unknown, are unveiled and brought to our knowledge, in broad daylight for everybody to see. It’s exactely what has started with the first sex abuse scandals in sport in USA  in 2011.

In the Book of Revelation, John of Patmos wrote that “For their power is in their mouth, and in their tails: for their tails (tails, here, is this a metaphor for the phallus?) were like unto serpents, and had heads, and with them they do hurt.” (Rev 9:19) and “Neither repented they of their murders, nor of their sorceries, nor of their fornication, nor of their thefts.” ( Rev 9:21). Yet, all those behaviours being brought to the attention to the world to see and ponder, and to act upon with justice for the victims have nothing to do with the End of the World in a religious sense.

And we have entered an era of unprecedented revelations and unveilings of huge, horrendous, widespread misuse of power and trust. It is ravaging the world. It was common already in centuries past. But the new card in the deck is that now abused or outraged people are standing up for themselves. They speak, they denounce the abuse, they organise themselves to gain strength. That is new, and a pioneering step into equality and restoration of balance. What is new is that also, not only do they speak, but their voice now is heard. Probably for the first time in our collective (and soon to be short-lived, at this rate) history.

It’s probably not the return of Christ in Majesty as per the Bible, but it is a time of revelations. The recent scandals, weather upheaveals and disturbances, disasters, fires ravaging huge acreage of land, hurricane, floods, terror attacks, political or civil unrest, decline of trust in economy, leaders, society, the collapse of  institutions, seem to pile up like crazy as of late, in a strange manner (almost weirdly satisfying too, as in “out with the old, hail to the new!”). 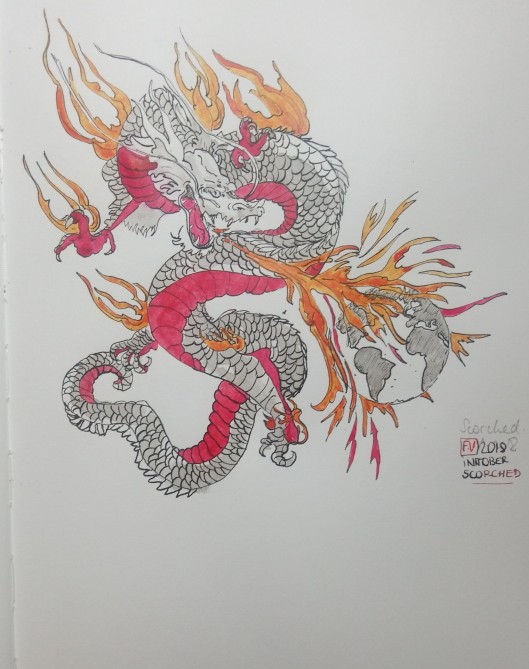 Everywhere, pillars of what constituted the very fabric of our western societies so far are crumbling. The deceiving actions of institutions and their representatives we used to trust are being exposed, their misconducts and intrigues are massive, extending throughout the country (ies) and back as much as 30 years. Many male politicians, entertainment moguls or sport figures, have shown their ugly face (most of them are quite disgusting and ugly, and I’m not talking only about their actions), their disdain of ethics when it comes to behave with a moral conduct, and their lack of responsability, once they’ve been exposed. Politicians engrossed with their own power and access to high spheres of decision making have been lying through their teeth to promote themselves, grab’n’stash more money, and/or a supposed prestige, at the expense of their country’s benefit (think Brexit, Venezuela). Renowned actors, producers, photographers, musicians have used their prestige and fame to assault people. They seldom show remorse for their behaviour (and never repent), for the trauma they relished in inflicting (because c’m’on, they were not “unaware” of what they were doing, right?). They even brag about how disgustingly they love to behave, sometimes in private, sometimes in a locker room.

Now, I’m not naive, we have seen that type of behaviours in the past, but rarely though, if ever, to such extent, with such arrogance and despise of moral and decency. The decency to be a respectable human being, making the right choice and doing the right thing over one’s personal lust after : a) power , b) money , c) a non consenting or vulnerable human being , d) immediate gratification detrimental to others/ethics/example/community/areas of service.

Is this more widespread now because it is seen in acion at the highest level of respnsability and not chasitised and condemned as it should and must? The Orange Chief of Staff here in America has set the tone of gross disrespect for (in no particular order) women, children (the boy scouts are still trying to make sense of his desastrous speech), disabled people, workers, his employees, his wife, his fellow citizens, the Constitution, the Senate, the Congress (and their elected representatives), the word “Origin”, Europe,  Africa, Asia (and their citizens), climate, the Earth, his generals, the intel from the FBI, the victims of school shootings (and their families), facts, the press, TV hosts, economists, seasonned politicians and counsels, his advisory staff, acurate numbers, truth, reality, grammar in general, coherence of speech and of thinking and so many others…? (hopefully, the boomerang always returns to the thrower, even if he’s a bad thrower, and if he is bad, it will hit him in the teeth. Sometimes it is also called karma).

The recent Catholic Church scandals cover-ups (firstly the child sexual abuse, then the nuns sex slavery and abortion scandals), the Jewish schools child sexual abuse scandals in 2018 and 2019), the Southern Church sexual assaults on children (Texas in Feb 2019), after the Weinstein, Cosby, Spacey, Cirrincione, Horowitz, Lauer, Goodman affairs (article of the NYT here ), after the agricultural scandals, the Monsanto trials, the abuse of our Earth, of the waters, the air, the uberproduction of plastic, the massive extinction of insects, species, the deforestation process to make money, with disregards to wild life & habitat, only just show that no aspect of life has been spared.

So, this is why it feels like a time of revelations, if not the End of Times, which will come sooner, if we continue to ignore obvious signs that Nature is outraged and that we have collectively and for too long abused and overused the resources of this wonderful planet called Earth or Gaia. These times can be seen as scary and terrifying, I see them as a chance to come clean and turn tables, getting rid of dirty practices and abrasive behaviours favored by tyranny mindsets from some leaders and world enslavement to profit. A chance to pacify our feverish minds consumated by technology fantasies, get rid of our fears, clean our planet and our ways of living. A time to expurge the pus of toxic behaviours (all of them ), cleanse, heal and implement better suited habits and societies.

For some time now, Gaia has been demonstrating quite boldly that she is fed up with us, and will eradicate us and wipe us off, as thouroughly as we have applied ourselves to deplete, abuse, pollute, neglect, mistreat, ignore and wrongly use Her.

Boomerangs returning to the throwers….

Thanks for your time, pls comment (respectufully, as you always do, my dears)

Disclaimer : I am not overly religious and I certainly do not claim to know things better than a regular Churchgoer. I expect respect (of my person, my opinions and my choices), as I give it. I respect all religions, provided they treat their adepts with respect and a high standard of morals and ethics, provided also that they live according to what they preach and set an example. If they do not comply with what they preach or do not respect others in their differences and their alterity or otherness, then they just discard and oucast themselves from the field, they have no legitimity to tell others how to conduct their life and can certainly not demand anything other than what they deserve.