What’s on my mind, folks? I tell you what’s on my mind : I am‪#‎ffffFrench‬. I feel more #ffffFrench than yesterday morning. I’ll tell you why. First here’s my quote on this flag, I tinkered and old flag image a bit, recaps well all this. 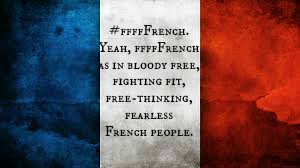 I see my ‪#‎compatriots‬ in ‪#‎France‬ hit and down, bleeding and dead,
I see their blood on the pavement and the tears, the horrendous use of other humans to kill blindly innocent people,
I see the cowardliness of so-called noble fighters who call themselves defenders of integrity, who only prove once more that violence organises their “model” society and show the limits of their hypocrisy.
I see a people who has fought bitter battles in the past,and has won, alongside others or for others, I recall Lafayette helping the American young nation getting its sovereignty, I could name Malplaquet and Dorylaeum, the battle of the Chesapeake, the battle of the Vosges, Lodi, all the battles between 1914 and 1918, Koufra and Bir-Akeim, Operation Dragon and the Battle of Normandy, the terrorists attacks in Paris in 1995 and the Charlie hedbo tragedy…
I see the flag of freedom punctured by the poisonous stakes of hate,
I see my blood running in my veins bleeding onto this beloved flag to give it its red color.
Let me explain the flag that I cherish : there is the blue for the eternal skies of freedom that every human being should be able to enjoy above his head,
there is the white, like the immaculate page onto which my compatriots and any lover of freedom can write their own sacred story, and there is my favorite colour : the red. Like the blood of life, the blood of anonymous heroes fallen and not forgotten, and innocent people randomly killed and martyrs of liberty. Red, like the fire and the passion with which we fight back. Unafraid.
For one who falls, seven stand up.
Because we are ffffFrench. As in free, fighting-fit, free-thinking, fearless French. It’s in our blood. Even when it stains the streets, it remains the blood of ‪#‎liberty‬

I am also friendly, fun, frank, and now, fortified.

Be well you all and fear not.